Call Us Location Menu
24/7 ONLINE SHOWROOM: WE WANT TO BRING THE SPECIALS TO YOU
BROWSE NOW
14 June 2018

It’s been an incredibly busy “splitting season” during the warm months, and thank goodness I had the use of a nifty little Caddy as a reliable companion. You may be asking, “What is splitting?” So this blog will briefly introduce you to a fascinating world that you may not know exists. 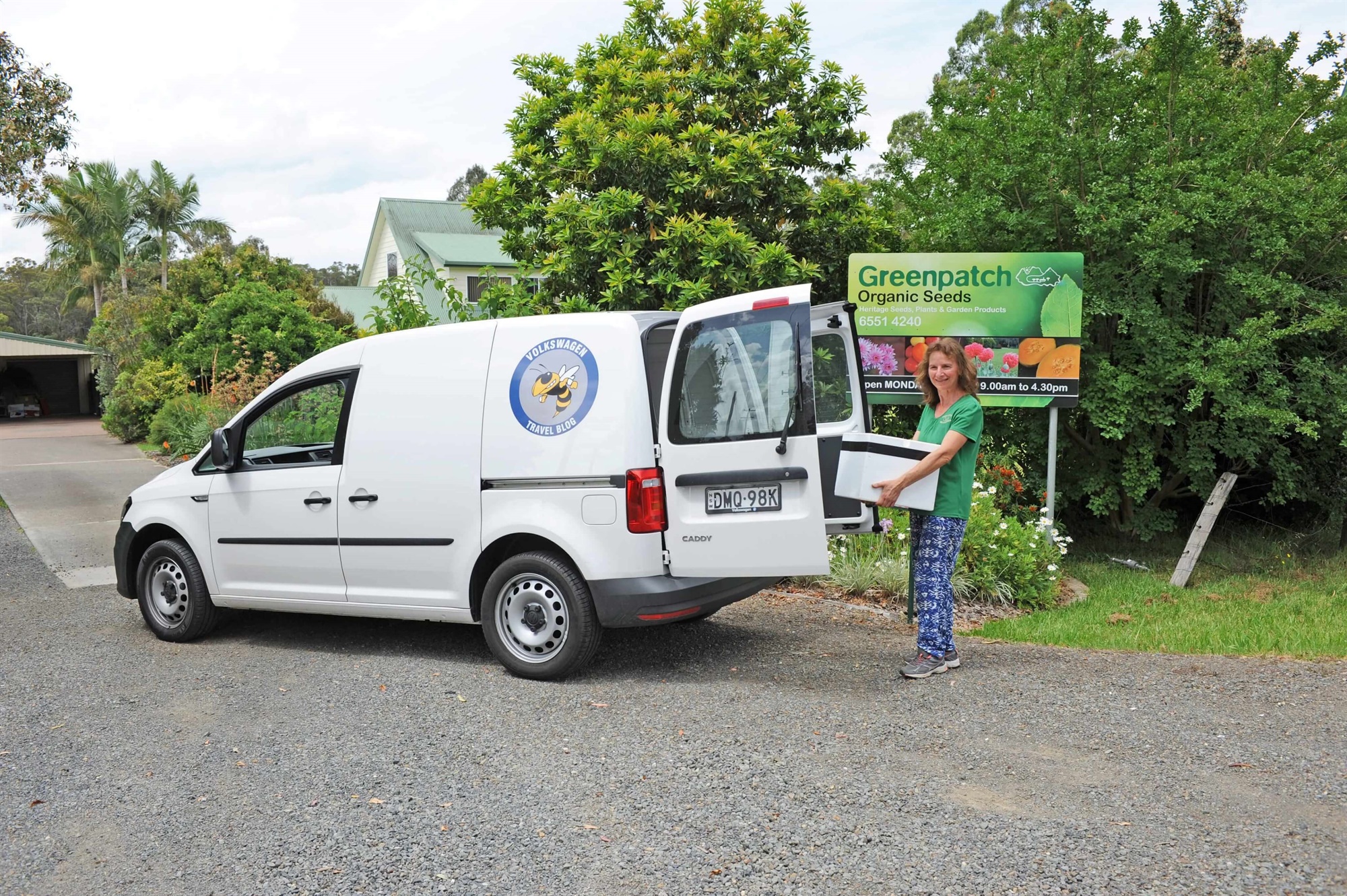 I keep and breed stingless native bees, which enables me to provide hives each year to home gardeners, schools or other organisations. It’s also an opportunity to educate people, particularly children, about insects and a platform to spread the word about eliminating the use of pesticides.

The interest is growing rapidly. At times, I can have more than 20 hives to transport, along with blocks or pipes to erect hive-pedestals, spare wooden hives and my splitting equipment. So, the sliding side-door and opening back of the Caddy van is perfect for the job. 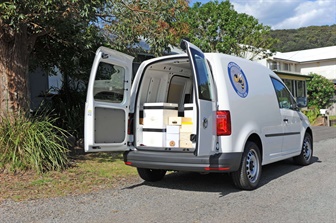 Summer is the busiest time for native beehive installations. One of my regular deliveries is to Old Bar on the mid-north coast of New South Wales. It’s an easy drive just over 300km from Sydney. The Pacific Highway’s transformation into the A1 started in 1996 and makes the four-or-so-hour journey a relatively straight run. After the slower bit through the interchange near Newcastle and Heatherbrae the trip opens to an uninterrupted picturesque drive. Once across the bridge that spans the still waters of the Karuah River, it’s around half an hour to Bulahdelah, which is a good stopping point with cafes and picnic spots by the Myall River. It’s also gateway to the Myall Lakes National Park, Wallingat National Park and Seal Rocks – all favourite destinations for adventurers or tourists alike.

The Lakes Way is a coastal tourist drive around 77km in length, beginning 5km east of Bulahdelah and ending 9km south of Taree with exits from the A1 clearly sign-posted. This scenic drive, windy in parts, passes through pretty beach and lakeside areas and is a peaceful detour.

Seal Rocks is off The Lakes Way via Seal Rocks Road near Bungwahl. It’s an iconic scuba diving location with more than 15 different dive sites and two deep historic shipwrecks. Little Rock and Big Rock are both islands of Seal Rocks and are marine sanctuaries. Grey nurse sharks and Australian fur seals are residents so it’s worth exploring. 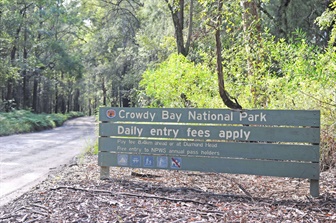 On to Old Bar

Tall timbered forests shouldering the road welcome you to the Taree/Old Bar exit. My bees are nearing their delivery point at Greenpatch Organic Seeds. This is a family-owned business that has been pioneering certified organic seeds and plants since 1993. Visitors are welcomed to enjoy a self-guided tour through the gardens, browse the nursery or see where plants are grown specifically for seed harvest. It’s just 900m from the A1 on the Old Bar Road. 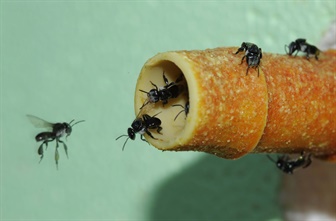 Bees are multimedia megastars at the moment and you’ve probably heard about the global bee crisis. Honeybee colonies and wild bees are dying off at disturbing rates and their decline is telling us something is profoundly wrong in the environment.

The worldwide demise of bees has drawn attention to a broad range of issues, not least of which is the insatiable use of pesticides, chiefly insecticides. Systemic neonicotinoid pesticides, or ‘neonics’, are one of the main and most obvious suspects in bee deaths.

Researchers are surmising that honeybees are also succumbing to other factors, including habitat loss, viruses and genetically modified crops. The Original Australian Trigona (Tetragonula) Hive (OATH) is a two-part wooden box-hive developed in the 1980s and has become the man-made backbone of native stingless bee production. Its uniform dimensions allow successful hive division to be done.

OATHs can be split at no less than two-year intervals. The bees seal the two halves together with resin, but with some careful persuasion, the halves can be separated. An empty top can then be put on a full bottom and vice versa – turning one hive into two. Each half of the hive, when full, contains eggs and food. The half that doesn’t get the queen has to wait until a queen hatches from the numerous ‘queen cells’ that are scattered through the egg mass.

Splitting a hive must be done correctly and with care for the wellbeing of the bees. The Caddy had several “happy” hives of Tetragonula carbonaria for delivery today. 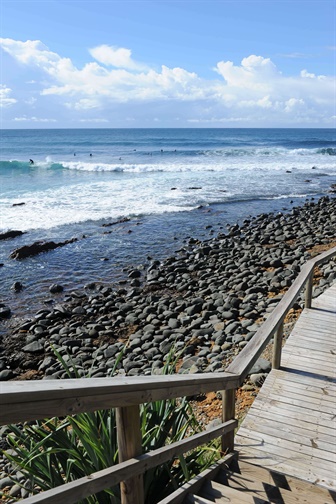 Even though I’ve been up this way dozens of times, it’s easy to be complacent and not venture further down the road - you know how it is when you stay with friends. But this time there was time to do a little exploring. Turning left out of Nev’s driveway took me back onto Old Bar Road towards the coast. After a short 10-minute drive, the right turn onto Saltwater Road led to the coastal beauty of Wallabi Point and Saltwater National Park.

The Saltwater headland track is a short, level trail through low windswept melaleucas that are bent to form a hugging hobbit-like tunnel. The branches beckon you towards the opening beyond that has a platform lookout that offers the most spectacular ocean and unspoiled beach views. What a perch for spotting whales from August through November!

There’s also another attraction here. A short boardwalk is one especially for keen surfers. This morning the carpark was full of utes – you know, those of “tradie surfers” or visa versa. The surf was clear with clean rolling breaks and a spot obviously valued by locals. There’s a picnic ground with covered shelters too. 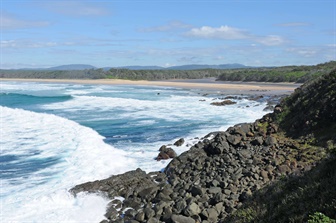 There’s another coastal treasure not far from Old Bar. About 45 minutes north of the Taree-exit roundabout is Crowdy Bay National Park. There are two exits from the A1 to Crowdy Bay and I suggest the second (when travelling north) - the Moorland/Jericho Road exit.  Jericho Road leads through wooded forests that soon give way to coastal heathland. It’s relatively passable for a gravel road, but sections are quite potholed and/or corrugated so some sensibility is needed. A very quiet low-key camping ground is at the end of the road and a good access track is nearby to the beach. There’s plenty to do - bush walk one or more of the many tracks, have a swim or enjoy wildlife and bird spotting. It can be very busy here though during peak times, especially Christmas and/or school holidays. 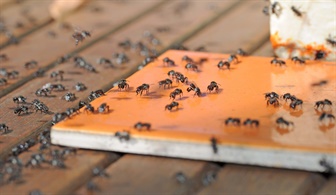 Home to my bees

During each day, I visit all my hives – my original hive lives happily on the veranda. Observing the differences in behaviour, buzzing tones and bee personalities is endlessly intriguing. The bees slow down during the cooler months but I look forward to spring when I start delivering hives again – hopefully in a Caddy!

Diane Norris has contributed to a number of publications including Australian Geographic and Burke’s Backyard. She was editor of Sustainable & Water-Wise Gardens, Good Gardening Guide, Good Organic Gardening and Organic Life magazines. She is dedicated to promoting sustainable and organic living solutions while advocating awareness of nature and wild regions through her photography and writing.